Robotic gluing, or gluing in general, is a widely used industrial fastening solution, with the latest advances in adhesive technology now enabling the gluing of any type of material.

Gluing limits the number of parts needed and provides a simple, cost-effective, means of automated assembly.

There is a wide range of formulations to choose from depending on the nature of the materials to assemble, the adhesive’s stated function and the conditions of application.

GEBE2 fits these sealing robots with pumping/dosing systems with drums ranging from 5 kg to 200 L. For small volumes, there is the option of cartridge packaging where GEBE2 offers glue robot system with compact and autonomous embedded dispensing heads.

Profitability is generated by gains in productivity, and also by optimizing adhesive consumption rates.

The use of part positioning tools and clamps is vital to ensure the quality of the assembly and proper functioning of the mechanisms. 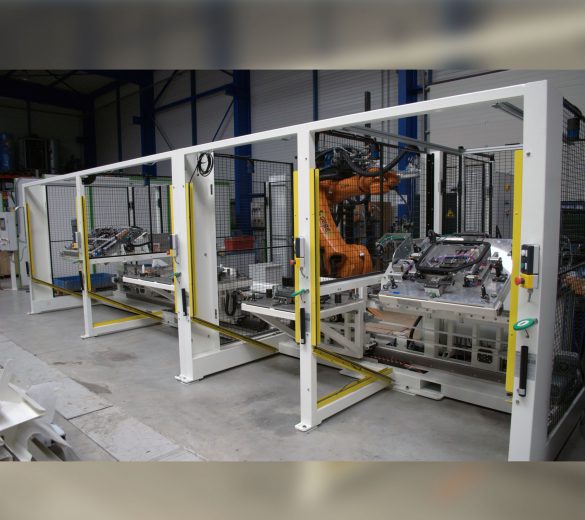 Robotic sealing is perfectly applicable to small and medium production runs. Bonding stations accommodate trolleys holding both the tooling and the part. Tooling changing times are very fast; the program is automatically selected via the trolley recognition system.

When carrying the part, the gluing robot lays the adhesive bead and also participates in manipulating and assembling the part on the structure.

The adhesive nozzle is fixed and is driven as a 7th axis to form beads with a triangular cross-section.

The development of controlled systems based on measuring tools allows the control and adaptation of the dimensions of glue beads. This allows us to meet the precision requirements of high value-added applications.

Our cells can integrate several measuring/glue application systems on one or more robots working simultaneously.

A robotic gluing project? Contact us! Our teams will get back to you very quickly.